The Need of Being Verse

Frost’s “The Census Taker” is one of the starkest poems I know.  The desert landscape in this poem is a precise inversion of the landscapes in Frost’s “Directive” and “The Need of Being Versed in Country Things”: not spent houses and vestiges of human order subsiding slowly into an ongoing natural vitality, but an empty shack still standing amid vestiges of human hurry in a seasonless wasteland. The contrast between the two landscapes— both of them abandoned and decayed, but in such different ways and with such different consequences— is a contrast between strong spending and wasteful spending, the pitch of the human spirit "into commitments deeper and deeper to a rounded conclusion" as opposed to the brutal pursuit of quick returns.

Frank Lentricchia has called this poem "as explicit a confrontation with nothingness as anything in modern American poetry.” It is, more specifically and more terribly, a confrontation with the dark side of that American history celebrated in "The Gift Outright"; it is a story of what happens when Americans possess "what we still [are] unpossessed by," figured in the shoddy workmanship of the tar-papered shack and the clear-cutting of the surrounding forest. Frost’s use of “errand” in the opening line is, perhaps, an ironic echo of Samuel Danforth's 1670 Election Sermon, "A Brief Recognition of New England's Errand into the Wilderness”: the Puritan aim of establishing God’s Kingdom in the garden of the New World devolves into a culture that consumes before it understands and hides the violence of its greed and wastefulness in such euphemisms as “wise use” and “resource management.”

I came an errand one cloud-blowing evening

To a slab-built, black-paper-covered house

Of one room and one window and one door,

The only dwelling in a waste cut over

A hundred square miles round it in the mountains:

And that not dwelt in now by men or women.

(It never had been dwelt in, though, by women,

So what is this I make a sorrow of?)

I came as census-taker to the waste

To count the people in it and found none,

Where I came last with some hope, but not much,

After hours' overlooking from the cliffs

An emptiness flayed to the very stone.

I found no people that dared show themselves,

None not in hiding from the outward eye.

The time was autumn, but how anyone

could tell the time of year when every tree

That could have dropped a leaf was down itself

And nothing but the stump of it was left

Now bringing out its rings in sugar of pitch;

And every tree up stood a rotting trunk

Without a single leaf to spend on autumn,

Or branch to whistle after what was spent.

Perhaps the wind the more without the help

Of breathing trees said something of the time

Of year or day the way it swung a door

Forever off the latch, as if rude men

Passed in and slammed it shut each one behind him

For the next one to open for himself.

I counted nine I had no right to count

(But this was dreamy unofficial counting)

Before I made the tenth across the threshold.

Where was my supper? Where was anyone's?

No lamp was lit. Nothing was on the table.

And down by one side where it lacked a leg.

The people that had loudly passed the door

Were people to the ear but not the eye.

They were not on the table with their elbows.

They were not sleeping in the shelves of bunks.

I saw no men there and no bones of men there.

I armed myself against such bones as might be

I picked up off the straw-dust-covered floor.

Not bones, but the ill-fitted window rattled.

The door was still because I held it shut

While I thought what to do that could be done—

About the house—about the people not there.

This house in one year fallen to decay

Filled me with no less sorrow than the houses

Where Asia wedges Africa from Europe.

Nothing was left to do that I could see

Unless to find that there was no one there

And declare to the cliffs too far for echo,

"The place is desert, and let whoso lurks

In silence, if in this he is aggrieved,

Let him say why it should not be declared so."

The melancholy of having to count souls

Where they grow fewer and fewer every year

Is extreme where they shrink to none at all.

It must be I want life to go on living. 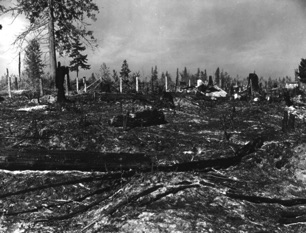