The voice of this poem is not the self-satisfied voice of one who is looking back, but the hopeful voice of one who is looking forward, finding his way, accepting loss (“Yet knowing how way leads on to way...”), and determined “to believe the future in.”  Frost is the master of Making Believe, which is the culmination of The Real Work, which we come to by way of our longing to be At One, Just Once.... So you might want to start there and find your way back here. (“In my end is my beginning,” and all that jazz.)

The Road Not Taken

And sorry I could not travel both

And be one traveler, long I stood

And looked down one as far as I could

To where it bent in the undergrowth;

Then took the other, as just as fair,

And having perhaps the better claim,

Because it was grassy and wanted wear;

Though as for that the passing there

Had worn them really about the same,

And both that morning equally lay

In leaves no step had trodden black.

Oh, I kept the first for another day!

Yet knowing how way leads on to way,

I doubted if I should ever come back.

I shall be telling this with a sigh

Two roads diverged in a wood, and I--

I took the one less traveled by,

And that has made all the difference.

It is this backward motion toward the source,

Against the stream, that most we see ourselves in,

The tribute of the current to the source.

It is from this in nature we are from. 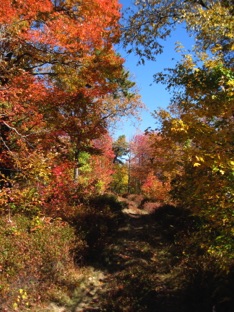