So I sat with my hands on him and talked to him as the light came on, described for him the mist on the fields, reminded him that he was surrounded by his good works— garden and home, children and grand children, many of whom happened to be nearby that weekend to attend a baby shower for a great grandson who would be William LaMotte, V (to his Jr). Every half hour, I removed his oxygen mask, trickled a cc of morphine into the back of his mouth, under his tongue, and swabbed some water onto his lips, gums, teeth, tongue, the roof of his mouth, to keep him from getting too dry. At some point, I washed his face with a damp cloth and gave him a new oxygen mask so he'd be fresh for the morning's work. And since he had always pooh-poohed the notion of "embracing the light," I adjusted the shades and doors so that the only light coming into the room was from the eastward window at the foot of his bed, so that he could just go toward the familiar morning.  And all of this was a continuation and fruition of conversations we'd been having all summer.

Amy woke me at about 5:00 am from the only two hours of sleep I'd had in two days to say, "I think your Dad wants you now"— some sense she had through his morphine sleep. And I went and sat beside him and knew that I could talk to him easily now because he would no longer try to respond.

The Work of Healing 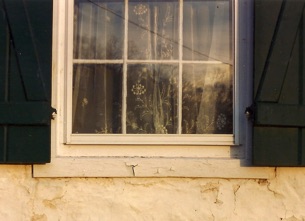 When my mother awoke, she was reluctant, at first, to speak to him, afraid that she would disturb him. But then she got the idea of putting on some music, the fourth movement of Mahler's fifth symphony, the adagietto, and while I adjusted the music, she spoke to him in her old, playful, loving way. "Oh, Will, here's our music."  For the first time in 20 hours he gulped twice, struggling to respond, and then he relaxed and let go. My mother sat holding his right hand, and I went and took my place at his left. And those last easy breaths, those last faint beats of the artery in his neck, were among the most beautiful things I have ever seen. It was the lovely, gentle, peaceful death that we had been envisioning ever since this all started last May.

"Believing the future in. . . ." That's Robert Frost's wonderful phrase for the way we live a life of faith or hope or wishful thinking (James's "willed belief"). It's one of the ideas that I kept putting in front of Dad all summer, as we talked about the "undiscovered country" (that's Hamlet, of course) that lay before us. And by heaven, we did believe it in…. Or rather, through faith and hard work, we made ourselves available to the grace of a good, a joyful death. And poetry was an important part of that work: sometimes our conversations would remind me of a poem that I would say for Dad; sometimes I found myself going to Robert Frost or Wendell Berry or Theodore Roethke or Walt Whitman or Shakespeare for companionship, assurance, renewal of will. Robert Pack (poet and teacher at Middlebury) describes how, as a young man at Dartmouth, he asked a professor, "What is poetry for?" And the elegant, donnish answer was, "Poetry allows us to face with grace and dignity the fact of our death." Stuffy perhaps, but simply and practically true.

For many years, my father would now and then take a walk over the rolling hills around our home to a little family graveyard in a stand of pines and the grave of his best friend, who died of a sudden heart attack in his early fifties. Once there, my Dad would pull out two shot glasses and a bottle of scotch, and he and Daddy Bill, as we called this friend, would have a drink together. So shortly after Dad died, while he was still there in his bed, I poured us both a shot so that we could celebrate a job well done, and I read for him, to him, this poem, which expressed the kind of joyful grieving that I felt and continue to feel. It's a poem in which Wendell Berry celebrates the older men from whom he learned the work of farming:

And their kind, men made for their fields.

I see them stand their ground, bear their yields,

Swaying in all weathers in their long rows,

In the dance that fleshes desire and then goes

Down with the light. They have gone as they came,

And they go. They go by a kind of will. They claim

In the brevity of their strength an ancient joy.

My father often called me "Boy." Later that morning, I stood by as the undertakers wrapped Dad's body in clean linen and rolled him into an elegant leather bag. Then I carried one end of the bag down the stairs so that we could complete this work together. "Make me know it! Hand it to me, boy!"

There is never any guarantee, of course, but we can cultivate a gentle death, make ourselves available to it. And it is such wonderful work that it is worth making some radical adjustments for. I don't know. There should be some equivalent to maternity leave. Instead, we leave dying to "the professionals" and then take a few days off for bereavement. What we're bereft of is not a loved one but the lost opportunity to accompany them as they set out on this wonderful journey, this transformation. Yes, by our culture's standards, my mother, father, and I were lucky, brave, devoted, and blessed. But in fact, we only did what humans are meant to do. And the fruit of it, for me, is that I have not for a moment missed my father, and I know I never will. I have no need to.

I sound angry and argumentative, don't I? I need to find a gentler voice for these things. But I AM angered by the terrible loss we inflict on ourselves-- the unnecessary loneliness of the dying and the lost opportunity for us to experience, here and now, the soul. To attend the dying is a lot like attending a marriage: whatever it is that happens there happens also in us. And it happens whether or not we believe in anything. It is beyond believing.