White’s Selbourne:  The Closer You Look

All nature is so full, that that district produces the greatest variety which is the most examined.

Gilbert White, an English pastor tending his flock in Selbourne Parish in the 18th century, kept a loving record of his observations about the plant and animal life around him through the changing seasons.  Like Thoreau, White was an amateur naturalist whose observations were valued by the scientists of his day.  Both of these daily walkers demonstrate the power of careful observation over time, the loving collaboration of mind and place from season to season.  The affirmation quoted above, from The Natural History of Selbourne, anticipates the principle of symmetry across scale and the fractal geometry of the natural world, represented in images like the one below from the Mandelbrot set— properties that, for example, make the shoreline of a lake bounded but infinite (because the finer the scale of your measurement, the longer the shoreline).  The closer you look, the more you see. 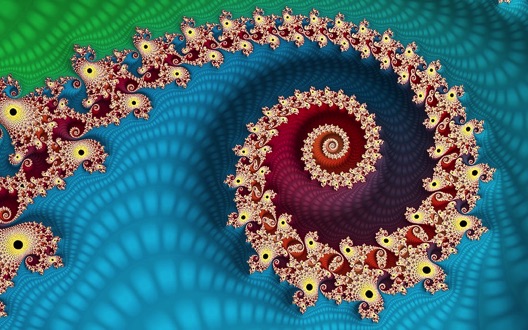