Few phenomena gave me more delight than to observe the forms which thawing sand and clay assume in flowing down the sides of a deep cut on the railroad through which I passed on my way to the village….  When the frost comes out in the spring, and even in a thawing day in the winter, the sand begins to flow down the slopes like lava, sometimes bursting out throught the snow and overflowing it where no sand was to be seen before. Innumerable little streams overlap and interlace one with another, exhibiting a sort of hybrid product, which obeys half way the law of currents, and half way that of vegetation. 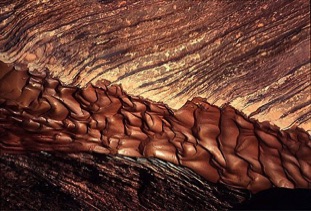 As it flows it takes the form of sappy leaves or vines, resembling, as you look down on them, the laciniated, lobed, and imbricated thalluses of some lichens; or you are reminded of coral, of leopards’ paws or birds’ feet, or brains or lungs or bowels, and excrements of all kinds.  It is a truly grotesque vegetation….

What makes this sand foliage remarkable is its springing into existence thus suddenly.  When I see on the one side the inert bank,--for the sun acts on one side first,--and on the other this luxuriant foliage, the creation of an hour, I am affected as if in a peculiar sense I stood in the laboratory of the Artist who made the world and me,-- had come to where he was still at work, sporting on this bank, and with excess of energy strewing his fresh designs about.  I feel as if I were nearer to the vitals of the globe, for this sandy overflow is something such a foliaceous mass as the vitals of the animal body.  You find thus in the very sands an anticipation of the vegetable leaf.  No wonder that the earth expresses itself outwardly in leaves, it so labors with the idea inwardly.  The atoms have already learned this law, and are pregnant by it.  The overhanging leaf sees here its prototype. Internally, whether in the globe or animal body, it is a moist thick lobe, a word especially applicable to the liver and lungs and the leaves of fat (γείβω, labor, lapsus, to flow or slip downward, a lapsing; λοβός, globus, lobe, globe; also lap, flap, and many other words); externally a dry thin leaf, even as the f and v are a pressed and dried b. The radicals of lobe are lb, the soft mass of the b (single lobed, or B, double lobed), with the liquid l behind it pressing it forward. In globe, glb, the guttural g adds to the meaning the capacity of the throat. The feathers and wings of birds are still drier and thinner leaves. Thus, also, you pass from the lumpish grub in the earth to the airy and fluttering butterfly. The very globe continually transcends and translates itself, and becomes winged in its orbit….