Nothing Gold Can Stay

Nothing Gold Can Stay

Her hardest hue to hold.

Her early leaf’s a flower;

But only so an hour.

Then leaf subsides to leaf.

So Eden sank to grief,

So dawn goes down to day.

Nothing gold can stay. 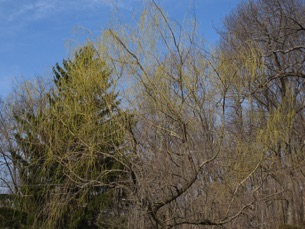 The “nothing” in this last line has the same positive presence as the “nothing” that is declared to be there in Stevens’ “Snow Man” or the “nothing” that is on the table in Frost’s “The Census Taker.”  Here, the shifting valence of the word “nothing” is driven by the ambiguity of that final verb, which can be an intransitive verb meaning “remain,” with “nothing” as its subject and “gold” as a predicate adjective: Nothing can remain gold.

But “stay” can also be a transitive verb meaning “to stop or delay”— a synonym of the verb “hold” in the second line and the same meaning that Frost employs (as a noun) in his famous definition of the poem as “a momentary stay against confusion.” Suddenly, it’s no longer clear what is staying what.  Nothing can delay the gold hue of the early leaf from giving way to some other hue. But the inverted word order attenuates the meaning a little and opens the possibility that “gold” is the subject:  Gold can stop nothing; gold can’t stop anything.  This play of negations in the last line casts over the whole poem a more powerful expression of mortality and absence.  Ever since “Eden sank to grief,” there’s a Nothing that is coming to us all, no matter what riches we store against it or how we try to delay or deny it, and this Nothing is the driving force behind the transitory promise of spring– “the force that through the green fuse drives the flower,” as Dylan Thomas described it, or again, the far from equilibrium conditions that give rise to such dissipative structures as flowers, leaves, dawn light filtering down from cloud to tree to earth, or the dancing energy of a poem as it rides on the breath, the mind, the heart.