American Poet-Naturalists and the Poetics of Loss

I presented this paper at a conference entitled "Writing about Nature in the 1990s" sponsored by Lehman College and the John Burroughs Society in April of 1991.  The talk was punctuated by recordings of birdsongs, so I have placed audio files at the appropriate locations in the text below. At right is a photo of a Hermit Thrush.

saw birds with rusty breasts and called them robins. But they were thrushes only vaguely resembling the rosy, daintier English bird. Larger, stronger, and in the evening of a wilder, lovelier song, actually here was something the newcomers had never before encountered....

I'd like to invite you on a brief excursion to hear that "wilder, lovelier song" as it echoes through our literature, calling the poet-naturalist to the task of transcribing the wildness of which we are a part. Along the way we'll hear various members of the North American thrush family, including the American Robin, Wood Thrush, Hermit Thrush, and the closely related Mimic Thrush, the Northern Mockingbird.

But as we start down the trail, let me say a word about the "poet-naturalist." The hyphenated name suggests a tension between two disciplines: one that transforms nature into myth and culminates in language, the other that employs language as one of several tools for observing and recording the forms of nature. "Antaeus-like be not long absent from the ground," Thoreau exhorts himself in a journal entry about writing strong sentences. With one foot in language and the other in nature, the poet-naturalist goes out to renew the correspondence between words and things. And the project of making, in Emerson's terms, "imperfect transcripts" of nature's "primal warblings"— brings the poet-naturalist inevitably to the songs of birds. 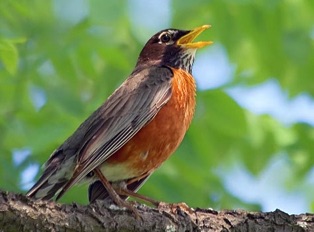 "I have been trying for years," Walt Whitman confesses to John Burroughs, "to get a brief term, or phrase, that would identify and describe that robin-call." This American robin is the first thrush we hear on our excursion. Its morning and evening incantations are everywhere this time of year [in spring] —as beautiful as they are ordinary, as familiar as they are wild. For Williams, viewing American culture as a constant struggle between new and old, native and borrowed, this "wilder, lovelier song" is the anthem of the local, challenging the artist to assert his or her "present reliance on the prevalent conditions of place." A century earlier, Thoreau laments that our poets are "prone to sing of skylarks and nightingales, perched on hedges, to the neglect of the homely robin-redbreast, and the straggling rail- fence of their own native land."