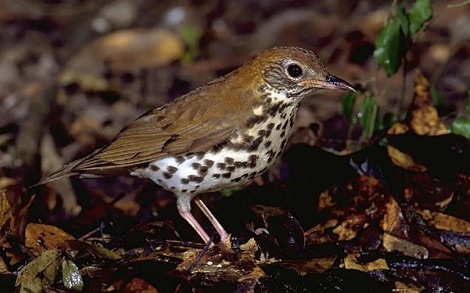 This spring, I heard the first wood thrush on the wooded ridge above our house.  I say that every year, when I really mean that I heard A wood thrush for the first time that year at a particular moment on a particular day.  But this year, I heard The first thrush, playing its broken flute, announcing its arrival, here, on this ridge, where no thrush has been since all of them abandoned us last September to make the long journey to their winter habitat in Costa Rica and beyond.

The wood thrush’s song is a song of loss and acceptance: two or three plaintive notes— reedy and liquid, drifting through the woods like strands of gossamer—followed by a burry double-tone, like some nano version of a Tibetan monk’s chant.  It has been said that all nature writing is elegy, a lament for lost or threatened grandeur, but also a lament for ourselves: fallen, banished, caught in this peculiar, self-reflective consciousness that requires us to stand outside the green world even as we yearn to belong to it.  The wood thrush, singing my grief, heals me, and that’s why I listen so intently for its song each spring.

We had a couple of days of rain this week, and then a shift in the weather, a spell of high pressure sailing in on a gentle, southwesterly wind.  It always seems to be just such a front that brings the migrating birds back each year during the last week of April.  I love to imagine them moving up the east coast flyway, riding a green swell of opening leaves.

I sat there as the sun disappeared westward along the ridge and the dusk came in from the east curling around the tree trunks.  I told myself I would sit there until sunset and then go in.  The woods grew quieter now as the dark approached.  A robin offered its benediction for the night.  The wren laid down one last riff of his “tea kettle,” as if to say, that’s it for birdsong tonight.  The rustle of old leaves and the snap of twigs told me a deer was moving invisibly through the brush nearby.

I pictured the thrushes emerging from the Pinelands, moving over the fields around Allentown, Robbinsville, Mercer Country Park, following the green corridors of the D&R Canal and Stony Brook.  That first Ovenbird had made a promise.  I told myself that it was time to go in now and that I would hear them in the morning.  And then I heard it.  Faint, incomplete, only the first two notes.  Far behind me, eastward along the ridge.  Then I heard it again, still just a couple of notes, but a little closer this time.  And then, closer still, the grief notes and the double-tone.  It was like feeling the first few drops of a gathering rain as the old, familiar mystery of the woods came home to the music of that broken flute.

There’s a wonderful scene in Thomas Hardy’s Far from the Madding Crowd where the shepherd Gabriel Oak reads the signs of an approaching storm: a toad traveling across his path, a garden-slug that had come indoors, the sheep huddled in a semi-circle with their tails toward the coming weather.  The shepherd, the shaman, “knew what this direct message from the Great Mother meant…. Every voice in nature was unanimous in bespeaking change.”  For a moment, as I rose from my chair and started down the path from High Point, I thought of myself as Gabriel Oak, having read the signs and been there to stick my net into time and witness the arrival of the first thrush.  But that little flash of self soon dissolved in the grace of the woods and the joy of that familiar song, and all that was left of me was a heart full of gratitude for the great journey that the thrushes had made again this year, the great journey that brings us here. 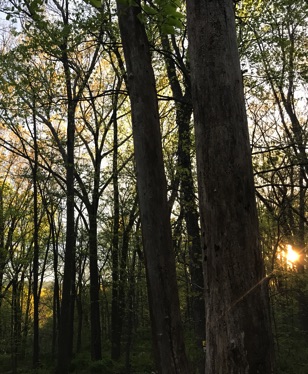 In any case, last April’s journal confirmed that the timing was right.  The woods were green enough, and the wind was coming from the southwest.  I made myself putter at other things for an hour, and then I went back up into the woods and walked quietly eastward along the ridge, to a pile of boulders where, last spring, a turkey vulture made her nest and hatched and raised one chick.  No nesting vulture yet this year.  And no wood thrush.  But as I made my way back westward along the ridge, I heard an Ovenbird call once in the deep woods off to my right, down the north side of the ridge.  Holding my breath, stepping as softly as I could, I came back to the spot I call “High Point,” a modest summit in the undulation of the ridge, where I keep an old chair for sitting and paying attention to the woods.

The thrushes—wood thrush, hermit thrush, and veery, as well as the even more elusive Ovenbird – are mid-wood birds, and the woods must be cloaked in green before these birds will appear.  But they need a front like this one, moving up the coast, to help them make the final push across the Delaware Bay to Brigantine Marsh, and then across the Pine Barrens to our wooded ridge in central New Jersey.  After all those miles of water and sand and pine barrens, these are the first upland, deciduous woodlands with the berries and seeds they need to refuel their fires.  Some of them will rest here for a few days and then follow the weather down east into New England and beyond.  Some of them will stay and nest.

Someone happened to ask me about a bird’s song at lunch on Thursday (April 29), and that got me thinking that the time and the weather were just right for the arrival of the thrushes.  When I got home, I walked up into the woods at about five o’clock and sat there for a while, enjoying the soft air and listening to the birdsong—cardinals, titmice, chickadees, a Carolina wren, lots of woodpeckers… but no wood thrush.  Not even the “teacher, teacher, TEACHER” of the Ovenbird.

I came back down to the house and looked through my journal.  Last year, I heard the first thrush—I mean, I first heard a thrush—on April 26.  That makes me sound like a Thoreauvian journal keeper, but the truth is that April is the only time of the year when I can be counted on to write in my journal with any consistency.  Maybe it is that the coming of spring makes me want, as Annie Dillard puts it, to stick a net into time and catch the moment when spring arrives.  Or maybe the thrush’s broken flute opens my senses so wide that I have to recollect myself in words.