It was such a grey, wintry afternoon—

just the ghost of the sun glowing white, gliding behind the sky as I raked leaves and hauled them to the brush pile, then went for a run along the towpath in Princeton.   I got home just in time to walk up the ridge to High Point. 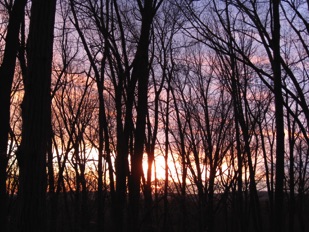 I didn’t expect to see much of a sunset.  I took the rake, as I usually do this time of year, thinking I might rake some part of the trail up there still adrift with fallen leaves.  But the woods were wintry still, and my muscles were humming warm and tired from raking all day and running, so I leaned the rake against a tree and just sat, listening and watching.  The sky was a uniform grey—hard to tell whether or not the sun had gone over the Sourland Ridge across the way.  The woods are winter bare now, and I can clearly see where Route 31 intersects Mine Road as it runs along just under the crest of the distant ridge on its way from Pennington to Ringoes.  Suddenly a great red ball slid from the clouds just above the horizon like a baby’s head crowning, swelling toward wholeness, muted, casting no rays, settling on the Sourland and beginning to melt into the earth even as its upper edge freed itself from the cloud, melting wider then thinner until there was just one drop of blood in a cleft of the distant treeline.  And then it was gone.  Some large animal, deer or turkey, was moving through the pathless twilight behind me, down the north side of our  ridge.  A redbellied woodpecker bobbed through the woods seeking a perch against the dark.  I shouldered the rake and started down the path toward home, grateful for the unexpected gift of that big gentle sun.

But the gift had just begun.  The orange afterglow, at first a small stain just above the horizon, began to kindle and spread.  It was one of those nights when the coda turns out to be a symphony—when the sun, as if to console us for its going, stains the clouds with dyes gathered in the dreamtime so that suddenly we can see through the sky to those other worlds upon worlds where all that we have lost is burning bright and whole again.  If you saw it, then you know that such colors do not fade or end but rather change so richly and gradually that darkness is just one variant, one shade of beauty in which a man with a rake on his shoulder might be walking down a ridge toward the light of home while a squirrel scrambles to its nest in the top of a pine and something he cannot see rustles the fallen leaves.